Your Opening Act – The Handshake 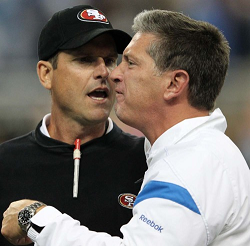 "You never get a second chance to make a first impression” (often attributed to Will Rogers... but nobody can be sure where it came from)

Having grown up in Michigan I was genetically engineered to have a soft place in my heart for the Detroit Lions.  However, when moving to Indiana several years ago, I became a fan of the Indianapolis Colts.  This year, things got pretty messed up when the Colts started losing and the Lions started winning – but that’s another story.


Back to the collision...
When I started getting interested in the Colts, their quarterback was Jim Harbaugh – who now coaches the San Francisco 49ers.  This past Sunday he coached the 49ers to a victory over the... (drumroll please) Detroit Lions – who were undefeated going into the game. After the game Harbaugh was pretty pumped up with the win and things got out of hand in the most unlikely of places: the coach’s handshake.


This got me thinking about the concept of a “handshake”: a seemingly trivial action that typically lasts no more than a second or two.  However, in that second or two an enormous amount of information is conveyed about who you are as a person.


So let’s talk about some ways to rock the handshake.
1.   All hands are worthy of a shake
My first “corporate job” was during a time and in a department where you did the “corporate look” - you know the kind: white shirt, tie, sport coat and all that phony “dress up” stuff.  Once I was with my boss, Bill, in a manufacturing plant.  We were in our white shirts and ties, walking past one of the machines and Bill stopped to talk to one of the workers.  The guy looked like he just crawled out from under the machine.  He was filthy from grease, grime and who knows what else.  Nonetheless, Bill stuck out his hand and introduced himself.  The guy apologized for being dirty and resisted the handshake.  Bill persisted with “I never have a problem shaking a working man’s hand”.  They shook hands and I followed suit.  Guess what:  hands can be washed.

I’m thankful for Bill’s influence – he taught me (by example) to build bridges with people.   That approach has led me to many successes as an engineer and a consultant.

2.   Be the “starter”
Be the one who extends the hand – no matter the audience.  This shows leadership and confidence.  Start anticipating a handshake before even walking in the room.  Get your hands out of your pockets.  Wipe them off if you’ve got sweaty palms... and stick it out there!  It only takes a second, but in that second, you’ve conveyed a big message.

3.   Be the “ender”
A handshake that goes too long is just plain creepy.  About 1-2 seconds is long enough in most settings.  Check out this one at about the 1:15 point: www.youtube.com/watch?v=Ml8Q_qZxWLE.  In Germany it is customary to shake hand with everyone when entering a room.  These guys have it down to a science – a firm grab, one shake, and then move on to the next person.  A typical “American” hand shake is between 1-2 “pumps”.


The “lock”
This is probably the most important part of the handshake.  If you don’t get all the way “in”, you will be in the position of having your fingers grabbed, much like a princess having her hand held to be kissed.  That is definitely not the position for a rockstar to be in.  Here’s a tip: you can avoid being the “princess” if you can get into the “thumb lock” position.
Sometimes you have to go in fast if the other person is a “grabber”.  But if you obey rule #2 above, you’ll be ahead of the game.  Prior to the squeeze, get your thumb-to-forefinger webs into contact.  This tip can provide a huge help for women or people who are shaking a hand that’s much bigger than your own.  Remember, this is a “hand” shake, not a “finger” shake.


The “pressure”
A friend of mine is a professor and he actually teaches international students how to shake hands per the “American style” and most if it has to do with “pressure”.  I still vividly remember a job interview where a high ranking executive actually made my knuckles crack.  This guy wasn’t big, but he had a serious grip.  A firm grip is good builds bridges.  A knuckle cracker builds walls between people.  A wussy handshake (like a dead fish) is worse than no handshake at all.

So how much is right?  That is a great question.  The best I can say is “firm”.  As a starting point, pick up a gallon of milk.  That requires a “firm” grip.   A handshake is a sort of “dance” – you have to work with you partner.  Firm will feel different in different contexts.  The good news is that you body has an amazing control system it can sense and react – but you have to be in tune.

The “eyes” have it
The last element of the handshake actually has nothing to do with the hands at all.  It’s your eyes.  I’m basically a shy person when it comes to eye contact and I have to consciously work on my eyes when speaking with others.  One trick I’ve learned to try to notice the color of the person’s eyes while shaking their hand.  This gives my eyes a task to perform and helps me to focus on something.
People know when you are paying attention to them and one of the best ways that they know this is from your eyes.  Another trick that helps connect is to somehow say their name during the handshake.  “It’s nice to meet you, Chad.”  “It’s good to see you again, Kathy?”  “Good morning, Joe.”


So get out there and practice...
Rockstars put in their time rehearsing and improving.  The best way to perfect your craft is to practice your craft.  So don’t be afraid, shake some hands.  You may even be able to shake up some new confidence or even a new image for yourself!  And if you ever find yourself on an NFL football field after beating the Detroit Lions, perhaps you’ll do better than Jim did.

For further reading check out:
http://www.sideroad.com/Business_Etiquette/handshake-etiquette.html

http://www.youtube.com/watch?v=Y7HJ3RDYPVc (advice from an "expert")