Getting the band back together... 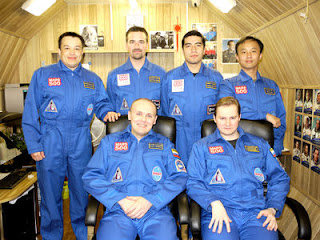 Tomorrow will be a life changing day for 6 people.

A few weeks ago I was reading Wired Magazine and came across an article about the Mars500 project. (“Are We There Yet” November 2011)

This was a fascinating article and I was surprised that I (being the geek that I am) had not heard about this before!


Basically the Mars500 project is an experiment where 6 guys were locked away in a simulated spaceship for a pretend trip to Mars. The total travel time... 520 days! That’s right, 520 days cooped up in an “experimental isolation facility”.

Their “journey” began in June of 2010. Tomorrow (at 11:00 am Central European Time) they open the hatches and the 6 guys (3 engineers, a surgeon, a physiologist and a astronaut research instructor) return to the real world. The Wired article speculated that they will return “changed in ways that they will forever protect as secret, and also in ways that they may never quite fathom themselves.”

This got me thinking... these 6 guys were removed from society for more than a year. They had only electronic communications with the "real world" and even they had to deal with a "simulated delay” – the delay being based on the lag associated with where they were in their "simulated journey”.

Let’s pull this into the rockstar engineer context...

These guys have already gone more than a year with no “live” interaction with people. One of the biggest lessons I learned when hitting my first “real job” out of engineering school was this: people are the most important part of the effectiveness equation. The quicker you learn this, the more effective you will be.

In college you can “hole up” in some remote location and pull an all nighter to tackle some task. You can be somewhat self-sufficient. In the real world you are, more often than not, dependent on others in order to be able to deliver. Even if you can create something you are going to be dependent on others to either supply, package, test and/or buy it.

As a typical engineer you may be better with math and science than you are with people. But to make the best use of your math and science you need to learn to play well with others. The best way to make that happen is to begin to understand the “value” of those around you.

I still remember walking into my first role as a laboratory advisor and the first time I met the technicians. All of them had been with the company longer than I had even been alive. I wasn’t too intimidated, however, since I had just completed my Master’s degree in the exact area of measurement that they were working with.

As I met the guys, I started asking them questions about sampling strategies, Nyquist wavelengths and transmission characteristic curves – all the analytical stuff that I learned about in graduate school. It’s probably no surprise that they couldn’t answer any of my questions.  It's probably no surprise also that they thought I was a complete jerk.  However, I went on to find about 1.0E6 things that I could learn from them . (That’s a million by the way.)

I went on to rebuild a relationship with those guys and thoroughly enjoyed working with them each day.   Each morning I looked forward to keying the combination to the door and they seemed to look forward to my arrival.  It turned out one of them was a phenomenal baker and his particular interest was in creating the greatest chocolate chip cookie ever.  I was more than happy to be his cookie tester... but that's a story for another time

Nonetheless, here a few learnings from that experience:

1.  I learned how things get done.
I learned that they “knew the system” and I didn't. These guys knew the right people and the most efficient way to make things happen. They introduced me to some of their "friends" and it was amazing how effecient things could be.

2.  I learned that my book knowledge meant very little in terms of what really matters.
I knew measurement systems signal processing. However, that meant very little when the main questions are related to “can we ship these parts?” or “why isn’t this part working the way it should?” Fortunately for me, these guys could look at the situation and know exactly what is going on. They would usually start their response with “several years ago we had this same problem...” and they went on to specifically identify the problem and propose best solution.

3.  I learned that a “position” or a “title” mean very little in terms of a person’s “value” .
My current job takes me from dirty manufacturing floors working with those that are the lowest on the salary scales all the way to executive offices of multi-million dollar businesses working with presidents and CEOs. I can honestly say that something can be learned from both places as well as from all those who are somewhere in between.

The Mars 500 guys have been "away" for a long, long time. Hopefully, a great deal can be learned from this experiment as I'm afraid that the team has paid a great price.  These 6 guys were cut off from human interaction for more than a year. Some engineers take this approach in their work lives and do all that they can to get away from people. I admit, there are times when we need to get away to focus. But I’m also the first to say, real effectiveness comes through working with people.