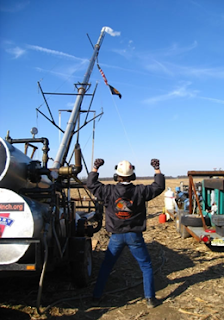 This week the 2011 Punkin Chunkin World Championships are being televised.    No, those aren’t spelling errors – that’s the actual name of a rather strange competition.  In this competition, a bunch of completely crazy, bizarrely creative, and yet amazingly smart guys and girls get together to see how far they can launch a pumpkin.  Sorry, did I say pumpkin?   For this event, they’re called “punkins.”

As I watched this, one thing struck me… these guys are having an absolute blast!  Even when a pumpkin shatters during the launch (they call it "making pie”), they still keep smiles on their faces and just get to work making things ready for the next round.  As most reality shows go, there is a lot of great behind-the-scenes footage showing the teams actually designing and building their machines.  They are laser-focused on one goal: make a pumpkin fly as far as it possibly can.  However, you also get to see that there is a ton of laughing, smiling, joking and more high-fives than you can count.  Team interviews are filled with comments like “this is what I live for,” “I put 110% into this,” “once I chunked a punkin, I knew I wanted to chunk punkins for rest of my life.”

Teams have crazy names like: “Bad to the Bone,” “United Flingdom,” “Pumpkin Slayer,” “Sir Chunks a-Lot.”  Chunkin legend “Fat Jimmy” even has his own dance.

This brings a rockstar engineer question to mind:

When was the last time you had this kind of fun while working on an engineering team?

Or, let me put this in terms of numbers (since you are engineers after all)…
How many high fives are given in your team meetings?


I'll just cut to the chase here: I think fun brings energy and energy fuels every aspect of the engineering process.

Now some of the Harvard MBAs out there will say (most likely while looking down their up-turned noses) “this is an example of a social dynamic best described as synergy.”  My response to that is: “Yeah, yeah, yeah.  Blah, blah, blah.”  I almost hate to use that s-word as it is way overused in business and I don’t want this blog to be classified as “just another guy talking about the same old buzzword.”  Did you realize that in the linked web page they used the S-word four times in the opening paragraph alone?  So let’s not even use the S-word.  Let’s just talk about bringing energy and focus to a team meeting or a team environment.

Here are some tips:

1. Have a crystal clear goal sentence.
Yes, I said sentence… singular.  Organizations are crippled when they have too many objectives.  The same is true for your team.

Make a pumpkin fly as far as it can.
Fit a square carbon dioxide filter into a round hole (see Apollo 13)

2. Realize that there is value in each person in the room.
Several years ago I was in a group of “specialists.”  Each of us had our own not-too-related-specialty and yet the cross-discipline collaboration was amazing.  There were no significant egos at play and the sharing of ideas was tremendous.  I was working in dimensional measurement, yet I learned a mathematical trick from a fluid dynamics specialist that I still incorporate in many of my projects today.

When I visit companies, I often find that the “lowest” person on the corporate ladder is the one who is the closest to the solution of the problem.  This person actually has his or her hands on the machine or measuring instrument and therefore often has knowledge that others don’t take the time to tap into.

3. Ask dumb questions.
As a consultant, I’m typically, the “outside guy” in a meeting.  This gives me the opportunity to ask the dumb questions.  In fact this gives me a huge advantage in a meeting and my “dumb questions” often get people talking in a way that they wouldn’t have otherwise.  A few years ago I was teaching a class in a very high tech Silicon Valley research center.  Just about every person I met in the room had a Ph.D. (or more) in some far-out aspect of physics, quantum mechanics or physical chemistry.  Everybody, but one guy, that is.

As I was teaching, this one, non-doctor guy would stop me and ask an occasional question.  When he did, an amazing dynamic happened in the room... just about all of these "doctors" seemed to exhale a sigh of relief as if saying “yeah, I wanted to ask that, but I was afraid to.”  After the session I found out that this one “non-doctor” was their vice president.  He was the rockstar in the room because he wasn’t afraid to ask questions.

4. Throw some dumb solutions out there.
The most creative of teams have something like an “umbrella of grace” kind of policy.  I originally heard of this concept from Bill Hybels at what is now called Global Leadership Summit and it is a very powerful tool.  This “umbrella of grace” policy means that there are no dumb ideas and grace is extended to anyone who puts forth an idea.  In some departments the “no dumb ideas” thing is often just a cliché.  However, great teams really embrace this concept. Sure there may be some joking along the way, but the bottom line is that all ideas are respected as even the weirdest one may lead to something great.  In fact, you can take advantage of this concept by using this approach the next time you put forth an an idea in a group setting:  “OK I need an umbrella of grace here... what if we try _____?”

This approach provides for two, powerful dynamics.  First, it makes it clear that you are being vulnerable and this idea may not be totally thought out.  Second, it gives the audience a less threatening presentation of your idea in the form of a question.  This question encourages discussion rather than a “sales pitch” which encourages criticism.  Presenting ideas in their earliest, most unrefined form (rather than waiting for all of the data to come in), allows others in the room to jump in and adopt them as their own.  For a person to put energy into a solution, they need to feel some ownership.  Having more people on board with your ideas, makes for more energy and for a better solution.  And let’s face it: full rock bands can typically make a lot more sound than a solo artist.

5. Now for the big one:  Laugh.
Yes, laugh.  When you are dealing with the deepest aspects of science like physics and chemistry, laugh.  When your pumpkin "pies" instead of flying 4000 feet, laugh. When you are dealing with the biggest warranty problem that your company has ever faced, laugh.  Laugh your head off.  Laugh until someone wets their pants.  OK, maybe just up to the point where someone is about to wet their pants.
I want to make a very important note here: you don’t have to be “off-color” to be funny.  In fact rude or profane humor can do far more damage than you might ever know.  Your audience may give courtesy laughter, but underneath they are probably distancing themselves from you.

Laughter brings energy.  The TV show M.A.S.H. was a comedy set in a mobile military hospital in South Korea during the Korean war.  For these doctors and nurses, even in the scariest, bloodiest, most gruesome moments – humor is what kept them going.  Some scientists have suggested that laughter actually gets more oxygen to your brain.

Hold it!  Don’t start Googling for the joke of the day or start digging through your favorite old Dilbert comics.  Humor that is real and energizing doesn’t necessarily come from the Internet; it comes from getting comfortable with those around you.  Humor that is real and energizing comes spontaneously and is best when it comes from a person that is willing to let his guard down.  Here are some quick ideas for making it happen:  Self deprecation (picking on yourself rather than others) is always safe – in fact I encourage it.  Real rockstar engineers don’t need to tell people how good they are – they can take shots at themselves and in doing so they build bridges with others.  Another powerful tool is one that a friend of mine refers to as “teasing up”.  In other words, when teasing others tease them about how super-great they are rather than cutting them down with sarcastic humor.  Sarcastic and insulting humor is the easiest and one of the lowest forms of humor.  Rockstar engineers don't need to stoop to that level.  "Teasing up" is also relatively easy, but do be careful about crossing the line into sarcasm.

Saying, “Hey Bill, you’re the closest we’ve got to an Einstein here.  What do you think about _____?” is a way of teasing up.  On the other hand saying, “Nice one, Einstein” could be a very sarcastic way of cutting someone down.  One last note: Be sure there is at least a tiny nugget of truth when teasing up and you will become a great energy catalyst in your meetings.


Bringing it all together…

I have friends who are musicians in various bands and they sometimes talk about when it just “works.”  “We had great time last night at practice.  We wanted to stick around all night and just jam.”  Unfortunately, this isn’t always the case.  Hopefully, some of these tips will help to make those “engineering jam sessions” happen more often.  But when you are stuck in a room and things aren’t clicking, try to shake things up.  If you still don’t get there, take a break or call it off (if possible).
One of the most common outcomes of a meeting without energy is the dreaded M-word… mediocrity.  And mediocrity is not the stuff of rockstar legends.

So get the team together, have a few laughs, crank up the amps to “11,” go launch a pumpkin and get your team rockin.

Maybe they will even name a dance after you!
Posted by Mark at 7:03 AM